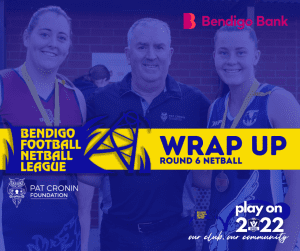 A MANTRA of “keep improving” has played a key part in the mindset of multiple premiership-winning coach Tamara Gilchrist in her time at Sandhurst Football Netball Club.

Despite an 80-17 victory against Eaglehawk in Saturday’s completion to the Bendigo Bank Bendigo Football Netball League’s sixth round, Gilchrist said there were areas to tinker with.

The team in maroon and blue did not make a strong start to the contest with Eaglehawk at Queen Elizabeth Oval, but lifted markedly across the next three to win by 63 goals.

The match was also in support of the Pat Cronin Foundation and its campaign to warn of the dangers and consequences of the “coward punch”.

Donations and merchandise sales from Saturday’s game at the QEO will go toward the Foundation continuing to provide the Be Wise presentations to schools, sporting clubs and community groups at no  cost.

On the court, Sandhurst goalshooter Bec Smith was again in top form and earned the Pat Cronin Foundation medal.

The Dragons have moved moved to a 6-0 record and a win clear of Kangaroo Flat and Gisborne.

The Dragons’ run at four consecutive A-grade premierships was derailed by Covid in 2020 and last season.

Results from matches played the previous Saturday were a 55-36 win for Gisborne against South Bendigo at Gardiner Reserve.

Kyneton marked a 54-40 win at home against Golden Square.

Indigenous Round will be played this Saturday.

Highlight of the round will be the match between the second and third-placed Kangaroo Flat and Gisborne on the Roos’ court at Dower Park.

South Bendigo will be on the rebound from defeat when it takes on Strathfieldsaye at the QEO.