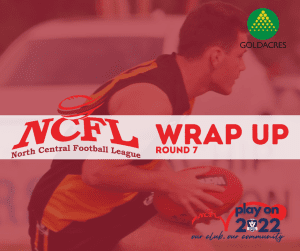 The Tigers were determined to end Donald’s unbeaten run and made a great start to the round seven showdown at Sea Lake to lead 21-10 at quarter-time.

It was in the second the Joel Donnan-coached Tigers upped the pressure and run as they scored 5.3 to 3.1.

Donald struck back to win the third term by a point, but it was Sea Lake Nandaly which finished strongly to score 4.5 to 1.5 in the final term.

The play of Trent Donnan, ruckman Ryan O’Sullivan, Luke Martin and Bryce Delmenico was a highlight in a 104 to 62 victory for the Tigers.

Boort turned a 17-point deficit at half-time into a four-point victory on St Arnaud’s ground at Lord Nelson Park.

The Andy Hawker-coached Boort had plenty of the play in a crucial third quarter but was let down by inaccuracy as it added 2.6 to 1.1.

Birchip-Watchem charged to a 52-point victory on Wedderburn’s ground at Donaldson Park.

The Bulls led 30-13 at quarter-time and then wasted plenty of opportunities as they added 1.9 to a goal in the second term.

Led by the play of Clayton and Dale Hinkley and ruckman Lochy Sirett, Birchip-Watchem won the second half, 44-18, and the contest, 89-37.

The Redbacks’ attack was led by Tom Campbell on three.

Wycheproof-Narraport dominated after quarter-time of its clash with Charlton at Wycheproof.

The Demons led 10-6 at the first break and then slammed on 4.5 to nil in the second.

Charlton’s goals were kicked by Riely Thiesz and Rhys Thompson.

In this Saturday’s eighth round, Sea Lake Nandaly Tigers are back on home turf at Sea Lake to take on Birchip-Watchem.