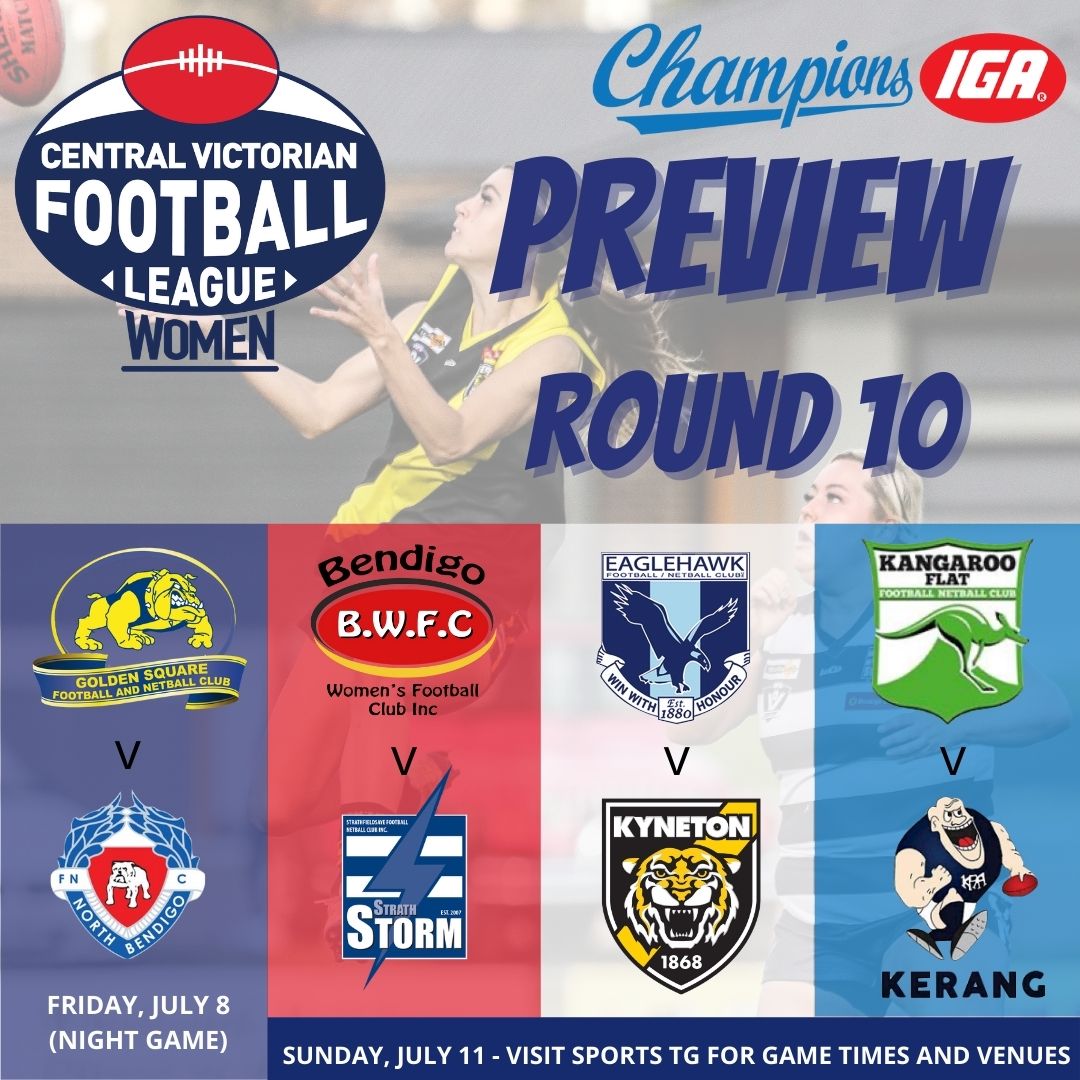 An unbeaten Golden Square takes on North Bendigo in the 10th round showdown at Fur Life Vet Oval in Wade Street from 6.30pm.

Aiming to be undefeated champions for the second year running, a star-studded Golden Square shone under Friday Night Lights when it beat Kangaroo Flat by 35 points in the ninth round played on June 25.

The previous meeting between the blue and gold against the red, white and blue in round five ended in a 134-nil win for Golden Square on North Bendigo’s turf at Hibo Hotel Oval in Atkins Street.

Players to watch for Golden Square include rover Madeleine White, Carly Ladson in the ruck, Sarah Baldwin in defence, and Bree Heiden as ruck-rover.

Madelin Jelbart, Bianca Rogers and Melissa Freestone have also featured among the best in recent games.

All other matches will be played from 2.30pm on Sunday.

In round five, Eaglehawk scored a 32-point win on Kyneton’s turf in a match for the Pride Cup.

Grace Edlin kicked four goals in that match and leads the Hawks’ goalkicking tally on 19.

Other key players for the Two Blues include Kristal Lugosi, Grace and Olivia Murley, Lily Den Houting and Shanae Sawyer.

Kyneton scored a two-goal win against Strathfieldsaye in Storm territory at Triple M Park in round nine.

The Tigers will also look to Teagan Ainslie, Jennifer Schellekens and Belinda Hateley to play their part in an upset win on the Borough’s turf.

The Roos won the fifth round match at Kerang’s Riverside Oval by 29 points.

An attack led by Shelby Knoll and Eloise Gretgrix is likely to kick enough goals to beat the Blues.

The Blues were outplayed in the first half of their recent hit-out at Eaglehawk, but worked hard to score four goals in the second half.

The round five clash at Strathfieldsaye’s Triple M Park ended in a 59-9 win for Thunder.

Storm’s defence faces a huge challenge trying to stop Britney Mueck who has kicked 36 goals to be the league’s leading goalkicker.

Thunder also has Brianna Burt and Georgia Gordon, 12 goals each, in great form.

Tameeka Morrissey has kicked 17 goals to be the key target in Storm’s attack.

After a three-nil start to the season and being top of the ladder, Strathfieldsaye is now 3-6, but only a win behind the fourth-placed Kangaroo Flat.