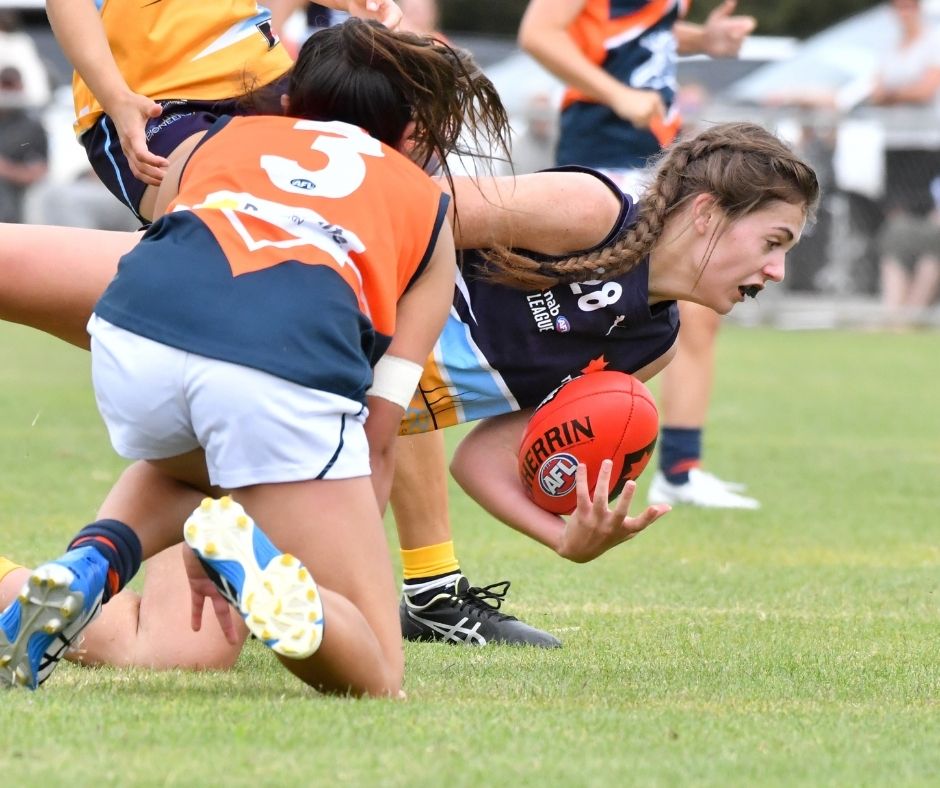 FOOTY for girls has grown dramatically since Tara Slender joined Strathfieldsaye Storm’s under-14 boys team for the 2016 season.

From being the only girl in the team five years ago, Tara has progressed to star for Storm and also represent Bendigo Pioneers, Essendon in VFLW, and Victoria Country.

This summer, Tara steps up to play AFLW with North Melbourne.

The high-leaping and strong marking forward was the 19th player selected at the AFLW draft.

“Footy was something I was always keen to play,” Tara said.

“I played in the school team and then joined Strathfieldsaye in the under-14s.

“It was daunting at first as I was the only girl there, but had great support,” she said of being in the team coached by Bruce Wallace, aka Butch.

“Early on it was just about having a game and enjoying it,” Tara said.

In 2017, Tara played in the under-14 boys and also for Storm’s under-18 girls line-up in the Bendigo Bank Junior Football League.

By 2018 the focus was on the 18-girls team with Strathfieldsaye.

Her pathway to the AFLW began with the Bendigo Pioneers in 2016.

“It’s a great program. I have learnt so much and being able to improve so many areas of my game.”

Tara was captain of the Bendigo Pioneers this season and earned the Ken “Ginge” Gilbee award for the player who did the most to motivate team-mates and uphold Pioneers spirit.

The award recognises Ken Gilbee’s long-time commitment to the club.

A highlight of Tara’s latest season was representing Victoria Country at the national under-19 titles and being selected in the All-Australian team.

Tara has played many on-field roles, but this season spent more time as a half-forward or in midfield.

Major strengths of her game include one-on-one contests and reading of the play.

“Consistency from game to game is something to work on.”

Although she starts in the forward 50m arc, there is a lot of running to link with and support team-mates in midfield and defence.

“There’s a lot of unrewarded running at times, but that’s what you do for the team, no matter what level you play.”

Because she is in year 12 at Bendigo Senior Secondary College, Tara will not start training with North Melbourne until September.

“It will be one training session a week at North Melbourne to start with, but the club will have a training program for me to do in Bendigo.”

For Tara it will not all be about running and kicking, there will also be workouts in the gym.

The 18-year-old has great support from parents Debra and Graham, and older brother, Dylan.

Footy is her focus now, but Tara also excels at karate.

“It has helped a lot with mobility and flexibility, and injury prevention,” she said of being in karate since she was eight.

Tara joins a growing list of players with links to central Victoria in the AFLW.

A path to AFLW was taken by Emma Grant from Gisborne to Bendigo Thunder to Collingwood.