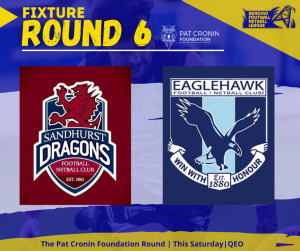 EAGLEHAWK faces the unbeaten Sandhurst in this Saturday’s completion to round six in the Bendigo Bank Bendigo Football Netball League’s A-grade netball action.

The Two Blues will play on Sandhurst’s court at Queen Elizabeth Oval.

The stand-alone matches complete a round aimed at raising awareness of the work of the Pat Cronin Foundation and stamping out the “Coward Punch”.

It’s also Umpire Appreciation Round in the Bendigo FNL, as it was last Saturday across leagues in AFL Central Victoria’s region.

The Tamara Gilchrist-coached Sandhurst has plenty of skill in all thirds of the court.

The win by the Dragons in the A-grade netball capped a great day for the club as the senior footy team retained the Ron Best Memorial Shield.

It’s been a tough run for Eaglehawk, whose only win was in round four against Golden Square on the Two Blues’ court at Canterbury Park.

The Hawks will be keen to hit back from a 56-30 loss in the fifth round at Maryborough’s Princes Park.

In last Saturday’s start to the round, Gisborne dominated play on its court at Gardfier Reserve to score a 55-36 win against South Bendigo.

It was a high-standard match between Castlemaine and Kangaroo Flat where the Roos broke clear of the Magpies to win 57-41 at Camp Reserve.

Kyneton is only two points away from the fifth rung after a 54-40 win against Golden Square in Tigerland at Kyneton Showgrounds.