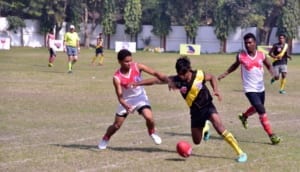 SEVEN members of the Bendigo Football Umpires Association will mark the new year by officiating at the AFL India National Championships.

The trek starts on January 2 and will be capped by the titles action on January 4-6 in Mushidabad, north of Calcutta.

Also in the touring party are Adam and Paul Symons.

It was six years ago that Bendigo-based Bruce Claridge from Sports Chaplaincy Australia led a group with links to football to India.

“It’s an amazing experience,” said Paula Shay from the BUA.

“The tour is not just about the football championships, which involve 10 states, but also visiting areas with low socio-economic growth.”

Day one will involve a coaching session, with matches and the finals to be played across the next two days.

“Matches are on a soccer pitch,” said Shay.

“It can be play-on at any time, and the ruckman can take possession at a ball-up.”

Those from the BUA involved with the AFL India titles for the first time are Annand, Miller, Russell, Tom Smith and Paul Symons.

A Paula Shay-made scoreboard which can be rolled up and was taken to India a few years ago is used for all matches at the championships.

“We will also be taking across 135 kilograms of donated football jumpers, umpire uniforms, and some footballs,” Shay said.

“The enthusiasm of the players and supporters is incredible.

“The championships are a fantastic opportunity to experience a different culture and to help AFL grow in another part of the world.”

Players will not only be vying for victory, but also selection to represent India at next year’s AFL International Cup.

Shay said the support from Andrew Zegelin at Travelcentre Bendigo played a big part in the ongoing success of what is now an annual trek to India.

A few weeks after the titles are complete and the BUA will start pre-season at Weeroona Oval.