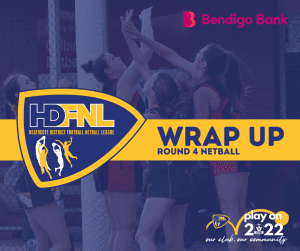 A RED-HOT White Hills was too strong for Colbinabbin in Saturday’s fourth round of A-grade netball in the Bendigo Bank Heathcote District Football Netball League.

The league’s most powerful teams in recent seasons have built up a tremendous rivalry.

On Saturday it was the Lauren Bowles-coached White Hills which dominated most of the match against a new-look Colbinabbin at M.J. Morgan Reserve.

The Demons won 51-30 and built on the momentum now gained from a hat-tricks of wins going into next Saturday’s home game against Elmore at Scott Street in White Hills.

It could be a preview to this year’s premiership decider as the Demons and Bloods are both unbeaten.

The showdown between Lockington Bamawm United and Huntly was much closer than many netball followers would have expected.

The Cats from LBU put in an impressive performance on their court at Lockington to almost rip the Hawks’ wings.

Mount Pleasant’s mid-court and attack was in form against Leitchville Gunbower at Toolleen.

It was a rest for North Bendigo and Heathcote who met in the season opener on April 2 at North Bendigo’s Hibo Hotel Oval in Atkins Street.

The Heathcote Saints marked a great start to the season by scoring a 48-35 victory.

Elmore had the bye.

In this Saturday’s fifth round, White Hills and Elmore meet in the match of the day in the Demons’ den at Scott Street.

Huntly and Mount Pleasant contest a crucial match for the Hawks and Blues at Huntly’s Strauch Reserve.

The Saints and the Grasshoppers meet in the Heathcote and Colbinabbin match at Heathcote’s Barrack Reserve.