Stephen Korp, a proud Wemba Wamba man, with a long history of football and netball in Central Victoria 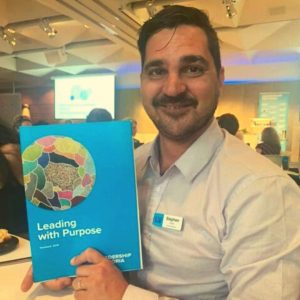 To highlight NAIDOC Week last week, we sat down with local Wemba Wamba man, Stephen Korp to listen to his story, hear about his involvement with football and netball, understand what NAIDOC Week means to him and his family, and learn about design of the Marong FNC Indigenous Shirts.

Stephen Korp, a proud Wemba Wemba man, with a long history of football and netball in Central Victoria

My name is Stephen Korp and I am a proud Wemba Wamba man that grew up in the town of Swan Hill. I currently work for the government as a firefighter and in Aboriginal Partnerships. I try and give back to community and I’m a part of an Aboriginal Controlled Community Health Organisation Board, local Aboriginal Education Group, and a few more local network groups. I have a daughter playing netball this year for Marong football netball club under 15’s and my partner is the netball coordinator.

I grew up playing for my local club Lake Boga we were called North Magpies but linked with the Lake Boga football netball club. I was there between 1999-2003 I was lucky enough to play in a senior grand final with Lake Boga back in 2003 in which we come home with the win and broke a 28 year drought, it was huge for the club but more so for the community as it brought everyone together as one.

After 2003 I went to played for a small town called Nullawil, and played there between 2004-2007, we played off in two grand finals at that time but unfortunately  we lost both times. I really enjoyed my time there as it was a small community and the club was it’s local pub as the township doesn’t have a local pub so you grow up knowing the local as they all come and watch you train.

I moved to Bendigo due to work and I started playing with Serpentine football netball club as an assistant coach in 2008, I only stayed there for one year as the travel got the best of me as I was based out at Heathcote for work travelling to Serpentine.

I then moved across to Heathcote football netball club 2009-2012, I took up coaching the reserves for a year and I was in and out of the seniors, but my last year there I focused playing in the reserves in which we won the premiership (2010).

I went across to North Bendigo 2013-2016, I played in a losing grand final in 2014 against LBU and I took up coaching the reserves for a year also.

When I was going to retire my cousin was the president of the Marong football netball club and I played one last year (2017), once again I was in and out of the seniors but got to play in a losing grand final in the reverses.

In 2018 I took on coaching the under 16’s for Eaglehawk junior football club I really enjoyed that year teaching the young men how to play the game but more about life and being a role model.

Currently I’m involved with Bendigo Master football club and I enjoy playing with the old boys and having a beer.

The importance of NAIDOC to me is about everyone coming together as one within the communities and showcasing our great culture to everyone and sharing and learnings together, it’s about educating and growing what our culture means. NAIDOC is about self-determination, but mostly for me and about connecting with mob in special event like the NAIDOC Ball or local events.

I like to do some aboriginal art work to connect back to culture, I was asked by Marong football netball club to help and design for their indigenous round.

The story behind the Marong FNC shirt design

This year’s indigenous design represents the coming together of netball and football at Marong and the community.

People sitting around the meeting circle with the sunset representing people coming together to support the club and community.

The different meeting places on the front and back represents all the players and supporters in their own environments being connected to the club.

The side of the jumper/shirt represents the Murray Cyprus Tree. The blue is the night sky with the stars representing dream time.

The boomerang on the front and back representing the players returning to the club. 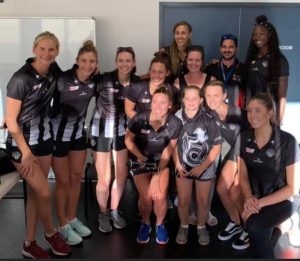 (Stephen, with his wife and daughter – Presenting a set of clap sticks to the Collingwood Netball Club. Stephen’s daughter wearing the design of the Lake Boga FNC netball shirt, which Stephen also designed.)

AFL Central Victoria would like to thank Stephen for sharing his story and helping to educate our community of the story behind his shirt designs.

We are proud and grateful to play football and netball on the traditional lands and will continue to educate our community on understanding and acknowledging the country their club is located on.